Parasites are living things that pull out other bodies the resources needed for their survival (AGUILAR; FERREIRA, p. 60, 1997). The frequency of parasitic diseases is directly related to the socio-economic conditions, and the increased prevalence of a direct consequence of impoverishment of the population. In addition, depends on the climatic aspects, soil characteristics, food habits and hygiene and sanitary conditions of the Community (FERNANDEZ; ANDRADE, 2005). The objective of this study was to raise awareness through literature review and field research, the importance of hygiene to avoid contamination and transmission of parasites. A field research through 11 collections of stool samples. Of the 11 results of 8 samples of them showed the presence of parasites, protozoa (Giardia) or helminth (roundworms), pointing out the need for orientation and awareness of the importance of hygiene to prevent transmission and contamination.

"Parasites are beings who find their habitat in another of different species, its host" (AGUILAR; FERREIRA, p. 60, 1997). The hosts can be invertebrates or vertebrates and the parasites can remain temporary or permanently.

The invasion of parasites can occur through the skin (by direct contact with contaminated soil/water or inoculation by insects transmitters) and/or the mouth (ingestion of water and/or contaminated food, objects, perversion of appetite which is the willingness to ingest foods unconventional or sexual practice).

It took thousands of years if spending for each species of parasite, within a gradual evolution, could achieve some degree of relationship with the host species (MARTINS, 2012). This evolution was necessary so that the parasite could modify certain characteristics morfofisiológicas and make the most of the beneficial conditions that the host could offer through adaptive mechanisms, seeking a better life and reproduce within the individual were. Through these adaptations the parasites have suffered modifications in different hosts, establishing a specificity between the guest and the individual were, i.e. a specific living thing kind of parasite-host only. The pathogenicity of parasites, generally varies greatly, depending on the number of infective forms naturally, virulence of the strain, age and nutritional status of the host (MARTINS, 2012).

Among the parasitismos, the intestinal parasitism is still one of the most serious public health problems in Brazil and arises from the presence of macroparasitas (helminth) and/or microparasitas (Protozoa) in the intestine and compromises of heterogeneously about of 25% of the world's population. The frequency of parasitic diseases is directly related to the socio-economic conditions, and the increased prevalence of a direct consequence of impoverishment of the population. In addition, depends on the climatic aspects, soil characteristics, food habits and hygiene and sanitary conditions of the Community (FERNANDEZ; ANDRADE, 2005). In Brazil 130,000,000 people are affected by some sort of parasite (SHIMIZU et al., 2003).

The parasitological examination of the stool has as objective the research of eggs, larvae and cysts of protozoans. The stool should be collected directly from the mucosa, being free of impurities, and should be handled in a maximum period of 4 hours, after which you will need the use of preservatives for the preservation of the material.

The macroscopic examination is performed by viewing with the naked eye, on a black background, noting the presence of larvae of helminths, proglotes of cestódeos. This exam also observe the color and consistency of stool. In microscopic examination is carried out through specific methods that determine, with greater precision, the reality of the infection, taking a broader view of the parasite.

The material should be examined first by the naked eye and later a small sample is examined the microscopic egg research and cysts of protozoans.

This is an exploratory and descriptive nature study, qualitative type, accomplished through books available at the University Library and articles indexed in the database system of the VHL, SCIELO, LILACS, sources in the 1997 period to 2013 and also by means of parasitologic feces collected from volunteers from Nursery C.E.I. Américo de Souza in São Paulo-SP.

In order to carry out the sample collection of faeces we reviewed 22 children who were divided into two classes, class I consists of the 1 year 1 children and 5 months of age and class II comprises children from 2 to 3 years of age. Of 9 children of the class I, only 7 were collected stool samples for lack of evacuation of a child. Of 12 kids in class II, only 4 samples were collected with 10 children showed the absence of evacuation at the time of sample collection.

After collecting the stool samples, carry out the examination through the technique of parasitological microscopic spontaneous sedimentation by method of Hoffman Pons & Janer or Lutz, that is to add about 2 g of feces in a beaker or borrel containing water and mix the material. Strain this suspension in glass funnel through a gauze folded into four, collecting the material in a container appropriate taper (glass of sedimentation), in which occur the sedimentation in General after the 24 hours. Collapse of the bottom of the Cup about to 50 mm ³ of sediment using a Pasteur pipette or a straw, rubbing forcefully with the index finger. Depositing the sediment in blade, add one drop of lugol's iodine, cover with a coverslip and observe the microscopic (CIMERMAN b., CIMERMAN s., 2008).

Data analysis was made of descriptive way, initially from the elaboration of a framework for the presentation of the main results and subsequently by the discussion of the results against the objectives proposed.

With analysis on samples collected was possible up results that were organized in form of picture, shown below:

All the legal guardians of the children who participated in this project received the parasitological examination result and were told to go to the health service.

Of the 11 children collected were found, be it the Protozoan parasites (Giardia) or helminth (ascaris) in 8 of them.

In Brazil, the parasitological examination in the first two years of life is less known than in other age groups. However, for all the children under two years old, the positivity found for a. lumbricoides was high percentage (Frenzel et al., 1979; Gendrel et al., 1983; Monteiro et al., 1988; Costa Macedo & Rey, 1997).

The results obtained show that 45% of participants of the project presented a. lumbricoides, pointing the importance of ascariose already in the first years of life and indicate the need for further development in the investigation of this parasitosis in population (Monteiro et al., 1988; Costa Macedo & Rey, 1997; Costa Macedo et al., 1998).

However, it is important to note that the infection by parasites is already observed from the first phase and may be related to the period of the introduction of new food and starts a stage of development that allows you greater contact with the environment.

The University City of São Paulo, the direction, the Faculty and the Administration have allowed us the opportunity to carry out this project.

I thank all the teachers for а provide us with knowledge, not just rational о, е а character manifestation but affection education in the process of formation of this project.

In particular the teachers Ana Cestari and Shashi Palladino for guidance, support and commitment by е dedicated and collaboration.

To Prof. Tangara е guidance technique to achieve the results.

[1] Graduated from the University of São Paulo, contact.: au[email protected] 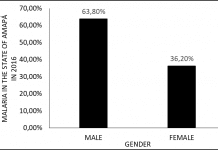 Epidemiological profile of serious malaria in newborns and adolescents served in 2016 in a reference hospital in the State of Amapá, Amazon Region, Brazil 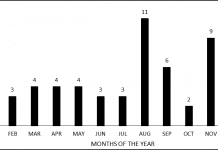