With the increasing population and the growing demand for increasingly sophisticated public services associated with the scarcity of resources, governments have to be efficient in the management of public policies. The research aimed to evaluate the importance of choosing indicators: social, economic and environmental, for success in the management of public policies. The article begins the discussion from the problem or socioeconomic demand, identified and inserted in the central agenda of the government, through the process of: elaboration, formulation, implementation and monitoring (monitoring, evaluation and adjustment) of execution of the actions of the projects and programs of said policy. This process, if well adjusted, allows the efficient solution, that is, with high return and low cost, both from the private and environmental point of view, as social demand or socioeconomic problem presented. In addition, the article aimed to perform a brief recent theoretical analysis and point out the major problems in the choice of indicators, to efficiently measure the impact of public policy, in order to provide future political decisions.

It is essential, in the management of Public Policies, to use appropriate instruments to assist in monitoring (monitoring, evaluation and adjustments), so that they achieve their strategic objectives assertively, spending little resources and reaching high levels of return. For this, the choice of efficient indicators that assist in the evaluations and prognoses of this policy, would be vital for the decision-making process, with regard to the efficient management of public policies.

It emerged in the mid-twentieth century (with the intensification of public sector planning activities and with the formulation of long-term public policies) the development and use of social indicators as a method (BAUER, 1967; BUSTELO, 1982). Social indicators, according to Jannuzzi and Pasquali (1999) have the function of: (1) supporting the development of urban development master plans and multiannual investment plans; (2) evaluate the environmental impacts arising from the implementation of large projects; (3) justify the transfer of federal funds for the implementation and monitoring of social programs; and (4) address the need to make other specific public resources available in the course of the implementation of the public policy in question.

It is of paramount importance to understand the limitations of a social indicator (WHO, 1996; JANNUZZI, 2001) social indicators should: (1) have a level of population coverage appropriate to the purposes of public policy; (2) be sensitive to the public policy that is desired; (3) be specific to the effects of sectoral public policy programmes; (4) be intelligible to policy actors and audiences; (5) be updateable from time to time at reasonable costs; (6) to be largely disaggregated in geographical, socio-demographic and socioeconomic terms; (7) enjoy a certain historicity to enable intertime comparisons.

According to the literature on the subject, it is then perceived the importance of the process of choosing relevant, valid and reliable indicators to increase the probability of assertiveness in solving the problem or demand identified in the central agenda of the government and proposed in the elaboration of public policy.

Specific information is needed in a timely manner in the decision-making process during the different stages of the public policy management cycle: demand identification (problem), inclusion in the central agenda of the government, preparation and formulation of the policy and finally the monitoring (monitoring, evaluation and adjustments) of the implementation of this public policy.

In Brazil, for example, at the end of the 20th century, with the insertion of efficiency as a principle in the Federal Constitution, efficiency in public management began to be legally required. The effects of the constitutional adoption of this principle were reinforced by Article 2 of Law No. 9,874/99, which deals with the administrative process at the federal level, which also inserted efficiency as one of the guiding principles of public administration.

The concept of efficiency used in this research is the pareto-Koopmans productive efficiency, proposed by França (2005), which highlights the proposal of Koopmans in 1951, for the microeconomic specialization of the concept of pareto efficiency, for the production of goods and services generated by an organization, where a firm is efficient when it optimizes the production generated compared to the necessary consumption.

The studies, also according to França (2005), on the productive efficiency of Pareto-Koopmans is formed from two aspects: (1) Technical efficiency, which avoids waste, both in the amount of insums (greater than necessary), and in the production of goods or services (lower than those considered possible); and (2) economic or allo-allocation efficiency, which refers to maximizing revenue and minimizing costs involving optimal quantities and prices, both of the insums consumed and of the products generated.

On the other hand, Marinho and Façanha (2000) highlight difficulties to analyze the alloging efficiency in difficult price determination sectors. In addition, they point out that generally, in magnitude, allore inefficiencies are lower than those of possible technical inefficiencies.

In addition, Torres and Cavalieri (2015) present, through a critical evaluation, problems in two common indicators in the Brazilian economic literature: the participation of industry in GDP and the industrial transformation value ratio (VTI) / gross value of production (VBPI). In the first measure they reveal abrupt oscillations because of changes in methodology and in the second it seems the impossibility of capturing interindustrial differences. Thus, according to the authors, such indicators can lead to misleading conclusions about the national productive structure.

According to Guimarães and Januzzi (2005), who perform another critical analysis, especially the Municipal Human Development Index, there are problems of both conceptual (and methodological) nature and the use of synthetic indicators as eligibility criteria of municipalities for the implementation of certain public policies. Therefore, they point out the need for the construction of indicators both standardized secondary sources and the production of customized data within the programs themselves.

According to Jannuzzi (2014), if the program or project produces results and impacts, it is necessary to analyze the costs involved in the operationalization to produce the units of results and the impacts in a period in that space. This is key information for assessing the sustainability of the public policy in question.

To close the cycle of public policy management, in the monitoring (monitoring, evaluation and adjustments) of public policies, the indicator is a key part, since both diagnoses and results and prognoses will be technically better supported, for systematic reassessment of the process.

It happens, according to Nepp (1999), that the process is, at the same time, much more complex and fallible than the classical planning models recommend, because in the process there is the interference of many factors that go beyond the technical-scientific issues, producing a certain bias in the results obtained. According to Cotta (1998), in Brazil, for example, in practice, evaluations of these public policies generally do not support choice in the decision-making process, because they produce inadequate results, attributed to the inefficiency of choosing the system of indicators.

As Carvalho reports; Leal e Souza (2021), there are environments that are not conducive to the formulation and elaboration of public policy, especially because the organizational culture of the government does not favor the implementation and monitoring of long-term programs, which can gather the necessary information and data, whose time horizon was beyond the traditional cycles: either a mandate of government or the Multiannual Plan.

For an indicator to fulfill its functions and have its appropriate metrics, in monitoring the management of public policies, it is important to keep in mind the function of indicators, which, according to Borba (1999), is to produce specific information about the recursive performance of the program, project or action of a public policy, which help to measure the observed changes. According to Pontes (2013), the articulation between monitoring and evaluation is fundamental to the public policy management system.

The choice of indicators should be based on a kind of calibration to adjust the demand or the problem proposed in the government agenda as public policy, the most common are the Bellagio Principles, according to Hardi and Zdan (1997), are guidelines from the choice of indicators, through the interpretation and evaluation of the whole process, until the communication of the final results. This principle aims at monitoring (monitoring, evaluation and adjustment) of public, private or civil society organizations (non-profit). The Bellagio Principles guide several works especially in the area of sustainability indicators (BECKER, 2004; BELL and MORSE, 2008; CEZARE et al., 2007; GUIMARÃES, 2010; LOUETTE, 2009).

The choice of indicators, which is part of the cycle of public policies, as widely confirmed in the literature, is preceded by the definition of the political agenda by stakeholders. In the choice, a trade-off is in the customization or standardization of indicators. According to Resende (2013) each program, or public policy, demands a system of indicators specific to its management. Each of the steps also requires indicators with different characteristics, making it difficult to create standardized models, applicable in any situation.

The main parameter, to identify the optimal point between standardization and customization of indicators is that proposed by Januzzi (2004), who uses three factors to differentiate the indicators: (1) to evaluate the efficiency of the means and resources employed; (2) to assess the effectiveness in meeting the targets set in public policy; and (3) to evaluate the social effectiveness of the program.

Given the discussion promoted in this investigation, it is clear, the importance of choosing good indicators for the use, especially in the monitoring phase (monitoring, evaluation and adjustment) of the implementation of public policies, in order to obtain more assertive results, in relation to the measurement of the performance of public policies of the central agenda of the government. As observed, there are, in the literature, mechanisms that guarantee an optimal choice for the governmental agent, but in practice the inconsistencies of indicators can constitute distortions in results which would lead to choice bias.

But there remains a question, which had not been contemplated, or at least exhausted, in the discussions on the subject, which would be the dilemma, the trade-off, between the customization and standardization of the metric used in the indicators.

On the one hand, the lack of standardization of indicators with regard to procedural records, recommended by technical studies, is a barrier to their use in other public policies. On the other hand, the fact that, in the metrics, they are the customized indicators, facilitates the understanding of the process, and increases the reliability and assertiveness of the measurement, both of the action and of the project, as well as of the programs related to that specific policy.

[2] PhD student in Social Sciences – Unisinos – Master in Economic Management of the Environment; Bachelor of Economics. Technician in Work Safety. Professor of the Higher School of Management and Judicial Expert. 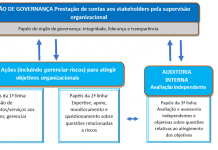 The performance of the internal government audit in the new Brazilian Federal Bidding Law (LEI No. 14.133/2021)

Administrative accounting consulting: a new way of running a company through technology

The Role of Knowledge Sharing From Knowledge Management

The fourth Industrial Revolution and the perspectives for Brazil

Consumer behavior: the factors of influence