In the preanesthetic evaluation, which should always occur before elective surgeries, the anesthesiologist performs the evaluation of the physical state. This study verified the profile of patients referred for inguinal herniorrharhary surgery in Joinville according to the criteria of the American Association of Anesthesiology from August 2016 to August 2017. The physical status was evaluated according to the classification of the American Association of Anesthesiology (ASA), identifying the classification of physical status (ASA 1, 2, 3, 4, 5 and 6) of patients undergoing inguinal herniorrhamy surgery in Joinville. The prevalence of airway 1, 2, 3 and 4 second Mallampati scale was verified. And it correlated the data for verification and elaboration of individualized therapeutic approaches according to the profiles found for the improvement of patient care. This was a retrospective epidemiological clinical study conducted from August 2016 to August 2017. 328 patients participated in the study, age 45.80±11.60, weight 81.22±13.32 and body mass index 27.28±3.79. The most frequent physical state, according to the American Society’s classification of Anesthesiology (ASA). Mallampati tracheal intubation difficulty was 1. This study aimed to quantify the prevalence of physical status ASA and mallampati classification of patients undergoing inguinal herniorrhacupia surgery in the city of Joinville between August 2016 and August 2017. In addition, demographic data (gender, age, weight and body mass index) were collected, as well as physical status and the mallampati intubation difficulty forecast classification.

As mentioned in Mathias (1997) and Fernandas Mendes et al., (2011),”The main purpose of preoperative evaluation is to reduce the morbidity and mortality of surgical patients.”, as since Vacanti et al. (S.d.), it is known that there is a close relationship between the classification of physical status ASA and mortality in surgery. So many other authors, such as Davenport et al. (2006), Schwartzman et al. (2014 and 2011), Santos et al. (2017) and Wolters et al. (1996), made the relationship between preanesthetic evaluation and physical status with complications in surgery and anesthesia, which places these factors as important objects of study for a better medical practice (FUJIWARA et al., 2019).

The prevalence of the factors evaluated was expected according to the literature.

The study was initiated after approval by univille’s Research Ethics Committee. This was a prospective epidemiological clinical study to be conducted at the Anesthesiology Clinic in Joinville from August 2016 to August 2017.

Patients who underwent inguinal herniorrhamy surgery and who had their preanesthetic evaluation at the Preanesthetic Evaluation Clinic of the Joinville Anesthesiology Service from August 2016 to August 2017.

Descriptive statistics (mean, fashion, median and standard deviation) were used for data analysis and the Microsoft Excel program was used®

This was a retrospective epidemiological clinical study conducted at the preanesthetic evaluation clinic of the Joinville Anesthesiology Service in Joinville , Santa Catarina State, Brazil, from August 2016 to August 2017.  It was approved by the Ethics Committee of Univille under number 3,249,237 (annex). Demographic data such as age, weight in kilos and body mass index were analyzed (table 1).  The physical state according to the classification of the American Society the Anesthesiology (ASA), (Table 2). Mallampati tracheal intubation difficulty forecast scale (table 3). Statistical analysis was performed by microsoft excel 365 software®.

Vacanti et. Al. (S.d.), performed an extensive statistical analysis on the relationship between physical status and mortality of patients in the postoperative period (TUNCALI et al., 2018). Therefore, Schwartzman et al. (2014) and Santos et al. (2017), discussed the importance of preanesthetic evaluation in prognosis and the possibility of complications in surgeries. According to the authors, patients who are more debilitated in their physical condition (ASA 3 and 4) are more likely to suffer complications related to anesthesia.  According to the study, the chances of an anesthesia-related complication are relatively linked to the condition of the patient’s physical state, which occurred as follows: 20.4% of patients classified as ASA presented complications I; among those judged ASA II, 22.3% of patients suffered from complications; 42.6% of ASA III patients had some complication and, more markedly, complications were observed in 100% of ASA IV patients, making these patients statistically 16.7 times more likely to present anesthesia-related complications compared to ASA I patients (FUJIWARA and colab., 2019).

In this same study, it was verified that between ASA I patients and ASA III and IV patients there was an increase in the duration of surgery, as well as between ASA II and ASA III patients. Blood loss was also an aspect related to asa status, demonstrating that ASA IV patients lose more blood than asa i, ASA II, and ASA III patients. Another point observed was the postoperative ventilation time, which showed an increase of 2 to 6 times between groups (1.1h for ASA I, 4.2 h for ASA II, 7.7h for ASA III and 45.5h for ASA IV). Thus, the ASA state directly influences the time of stay in the hospital, subjecting the patient to intensive care, in which patients with lower ASA states need to stay less time in the hospital when compared to patients with higher ASA status. Regarding complications according to ASA levels, an increase of 2 to 3 times in bronchopulmonary complications was observed, while in the cardiac ones an increase of 3 times was observed. Finally, there was a mortality of 0.1% for ASA I states, 0.7% for ASA II, 3.5% for ASA III, 18.3% for ASA IV and 93.3% for ASA V.

Another important factor of the preoperative evaluation (within the physical evaluation part), according to Mathias (1997)(SOUZA and colab., 2005), is the evaluation of airway pathability, which aims to predict the difficulty of intubation of the patient. One way to perform this assessment is with the Mallampati classification, which is often used, as seen in Lundstrøm et al. (2011) (LUNDSTRØM and colab., 2011) and Shiga et al. (2005) (SHIGA and colab., 2005).

The present study aimed to quantify the prevalence of physical status ASA and mallampati classification of patients undergoing inguinal herniorrhacupia surgery in the city of Joinville between August 2016 and August 2017. In addition, demographic data (gender, age, weight and body mass index) were collected, as well as physical status and the mallampati intubation difficulty forecast classification. Having said that, it is worth noting that these are themes little studied by the population and, given the clear importance of both these classifications regarding anesthetic and, consequently, surgical outcomes, this epidemiological study demonstrated that these variables “physical state ASA” and “Mallampati classification” can help in understanding these variables in our population, which may raise new studies in this area being of great value for anesthesiology , which is likely for the initiation of a surgical procedure necessarily performed under general anesthesia and mechanical controlled ventilation, such as inguinal herniorrhaias by laparoscopy. 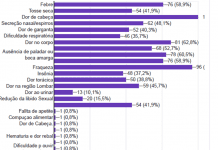 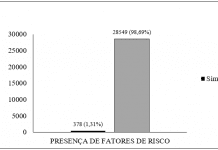 Impact of Postpartum Depression on Breastfeeding: An Integrative Literature Review

Socioeconomic and health profile of workers in industries of the Amazon...

Number of accidents caused by venomous animals between 2010 and 2014...