Início Health Study of harm and damages in diseases that can cause air conditioners...
PDF
[]
1
keyboard_arrow_leftPrevious
Nextkeyboard_arrow_right

The present work has as objective, based on the theme: Sick Building Syndrome, search, inform, and biochemical and microbiological testing in some environments at the University of São Paulo (UNICID), in which the students get a greater time in the presence of an air conditioner, observing possible microbiological contamination. 20 petri dishes were prepared, 10 plates containing 20 ml of culture medium TSA to collect bacteria and 10 plates containing 20 ml of culture medium of SDA to collect fungi. After the preparation of the culture medium of TSA and SDA, the plates were subjected to air samples. Each plate was slightly inclined and close way positioned by three minutes. After this time, the Board was closed and transferred to the greenhouse. Plates with a little TSA were kept in the greenhouse for 24 hours, and then placed in the fridge, and boards with SDA were kept in medium oven 10 to 15 days, after they were kept at room temperature. Growth was observed in both cards in some environments and on the boards with the TSA was held to the Gram stain technique and after a few days the technique of Catalase. For best results and with the purpose of a comparison of the signs, was held also a positive control, and this time the samples were collected using a cotton swab, where they collected dirt from inside the filter. We have obtained different results for the kind of TSA and the SDA, however only in a location collected tested negative for the Middle TSA the rest have all been positive, that is, there is the presence of bacteria on the site and for the kind of SDA, only in one location was positive. Therefore, in order to prevent questionnaires were conducted with students and distributed some folders containing information about cleaning, care and use of PPE for people who carry out the maintenance of the air conditioner.

These days, increasingly idealized, health promotion and prevention comes covering environmental factors also applicants of the air we breathe. Both on the street, as in closed buildings, where citizen dedicates a considered amount of hours of your day, that is, apart from air pollution in the streets, we deal also with the pollution inside the buildings, the so-called sick buildings. This occurs due to lack of maintenance when cleaning the air conditioning.

In force since 25 October 2000, the Security Council resolution. 176 of the national agency of sanitary surveillance and updated on 16 January 2003 by resolution 009, established rules for which air-conditioning systems do not become a permanent threat to the people who attend artificially air-conditioned environments.

The air conditioning is a Maximizer in case of contamination by germs because it contains dust particles and water that are capable of transporting and exposing microorganisms when in contact with people. Based on the theme: Building Syndrome patients and the self-assessment of individual and collective health of the people who, at some point in College are exposed to air conditioning, we saw the need to search and perform biochemical and microbiological tests in some environments at the University.

The present study had as objective to evaluate the dangers of air conditioners, the University City of São Paulo, in which students spend a longer period of time.

Assess the hazards of air conditioners, the University City of São Paulo, in which students spend a longer period of time. Therefore, microbiological testing were performed with the use of Petri dishes containing Middle TSA and SDA, identification of species of bacteria by Gram stain technique. As well as biochemical tests as the technique of Catalase.

The work was conducted at the University of São Paulo, during the course of Supervised Practice, which the locations chosen were: 9 Study Room of the library, the Aquarium of the D block and the laboratory of clinical analyses.

In the second step, the collection of microbiological material, where in each air conditioning, each plate was slightly inclined and close way positioned by three minutes. After this time, the Board was closed and forwarded to the greenhouse, for microbiological growth. Plates with a little TSA were kept in the greenhouse for 24 hours, and then placed in the fridge, and boards with SDA were kept in medium oven 10 to 15 days, after they were kept at room temperature.

In the third step, after the bacterial growth colonies were selected to be performed Gram stain by Gram.

In the fourth stage, the biochemical test that was the technique of Catalase, where in each test tube 1 ml of hydrogen peroxide was placed. Using the handle was microbiological material collection bacteriological the petri dish and placed next to the oxygenated water in test tubes, always near the fire, avoiding contamination.

In the fifth step was performed the positive control, where with new petri dishes, two with culture medium TSA and two with culture medium of SDA, was made a new collection of samples of the air conditioner of the same locations, but this new specimen was collected with cotton swab, gathering the dirt present within the air conditioning filter After the collection, the sample obtained was subjected the petri dishes and left at room temperature for bacterial growth. This procedure was made so it could be made the comparison of the signs, between the plates that were exposed to the air for 3 minutes and the plates that contained material collected by swab.

The sixth stage was composed by forms of interviews with students who attend the locations chosen, which were: study Hall Library and Aquarium 9 D-block.

The seventh and last stage, the orientation of those responsible for cleaning the air conditioning the use of PPE, because at the time of the cleaning, the filter may become loose as the microorganisms that have been found, which may lead to the emergence of some health complication.

It was observed that in all the plates containing culture medium TSA, the Aquarium and study hall, library 09 number was obtained from the bacterial growth. However, on the boards with SDA culture medium of the same places, just was retrieved from the growth of fungus on a Board, which was study hall number 9.
However, in the Clinical analysis laboratory, microbiology, don’t got no growth, bacteria, fungi. This is the correct maintenance and cleaning of the local air conditioners.

According to Roberto Martins Figueiredo (2014)

It is recommended that cleaning be done, on average, 30 in 30 days, but this time may vary, depending on the operating conditions of the machine, the environment and the type of appliance.

In this step, you only used culture media TSA, in the places, where they obtained bacterial growth (Aquarium and study number 9).

In virtually all samples, the colour purple, which is characterized by being Gram-positive bacteria, and only in the Aquarium, 2 blade was retrieved from pink and purple featuring Gram-positive and negative.
Second Department of Microbiology ICB/UFMG,

This technique is named, who discovered it was the Danish Hans Christian Joachim Gram, in 1884. Which realized that the bacteria acquire different colors, when treated with different dyes. Therefore, it was possible to classify them into two different groups: the purple ones were Gram-positive and calls the red and roses, Gram-negative calls.

Gram-positive bacteria: cell wall formed mainly by teicóicos acids. Which by lot, after colouring, form a coloured complex intense blue, which is not easily removed with alcohol ketone.

Gram-negative bacteria: cell wall formed mainly by lipids. Which retain the colour after treatment with alcohol ketone and are stained later when fuchsin or safranin solution.

Some examples of Gram-positive bacteria, Staphylococcus and Streptococcus are: Enterococci, the same, are all pathological agents. Therefore, it is of paramount importance to the immediate cleaning of the air conditioners in the rooms that the results were obtained, Aquarium and study hall number 09. A couple examples of gram-negative bacteria, which have only been found in Aquarium, 2 Blade are Salmonella, E coli among others, as well as pathogens. -Department of Microbiology IFG/UFMG.

Therefore, the solution to these cases would be the correct cleaning of air conditioners, since these microorganisms can cause major complications for us, human beings, and the results were obtained from sites that more go: Aquarium and Study Room of the library.

Catalase is an enzyme responsible for decomposing hydrogen peroxide (H2O2) into water and oxygen. Is used to differentiate bacteria of the Staphylococcus, Streptococcus, Enterococcus, Listeria, among others. And when there’s fermentation, in the test tube, is characterized by being positive, Catalase when it is not characterized by being Catalase negative. -Biomedicine and Micro by Douglas Martins.

In this step was obtained in Catalase positive results in two samples of the Aquarium and in the two samples from study hall.

4.4 IMPLEMENTATION OF THE FORMS OF INTERVIEW WITH STUDENTS WHO ATTEND THE SITES CHOSEN

Figure 1 represents the amount of student smokers and nonsmokers, after conducting an interview for the course Academic Biomedicine.

Already figure 2 describes individuals with or without respiratory or Dermatologic problems.

Figure 3 represents individuals with respiratory or Dermatologic problems you do or not some kind of treatment and also shows individuals who do not have health problems.

The poor quality of indoor air of the locations became known as Sick Building Syndrome, which are problems that occur due to lack of proper cleaning of these appliances, which should happen at least once a month.

Many people complain of conditioned environments, and from this, biochemical tests were made on air-conditioning appliances situated in two locations of the University City of São Paulo, which were: the aquarium in block D and homeroom library 09, of which in catalase, microorganisms have been identified as Staphylococcus, which can lead to skin infections to Septicemia.

Based on this theme, on individual and collective health self-assessment, through forms of interview with students who attend the locations chosen at the University, was seen varied reactions to the environment conditioning. There were answers of which students in no time they were harmed by the air conditioning, and also never submitted any nasal or dermatological problem. There was also, students who had a history with nasal or skin problems, and showed that, when exposed to conditioned environments, felt that the air hurt your situation, featuring hay fever, sinusitis, bronchitis, among other problems. There were also students who, despite not presenting history with nasal or skin problems, they felt some kind of discomfort amid artificially conditioned environments.

To improve the picture, was requested to the cleaning of appliances, wipe this equipment at least once a month, and that when they were cleaning, use Ppe for individual protection against possible risks that may be present.

Available at: http://www.universoambiental.com.br/AR/Ar_EdDoentes.htm accessed on: 9/3/2014

Department of Microbiology-gram differs from Coloring

Biosecurity – cleaning of the air conditioner

[1] Academic course of Biomedicine of the University of São Paulo.

[2] Academic course of Biomedicine of the University of São Paulo.

[3] Academic course of Biomedicine of the University of São Paulo.

[4] Academic course of Biomedicine of the University of São Paulo.

[5] Academic course of Biomedicine of the University of São Paulo.

[6] Professor at the University of São Paulo.

[7] Professor at the University of São Paulo.

The Mysteries That Surround Kawasaki Disease: A Literature Review 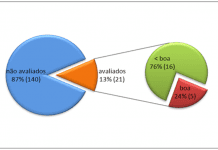 Chemical dependence by marijuana use: from pleasure to illness. A serious problem in Public Health in Brazil

Incidence of Psychiatric disorders in pregnancy and Puerperium in women 18...