The mandibular fracture has as its most common causes car accidents, physical aggressions, falls and accidents in the removal of teeth, among others. However, facial injuries caused by firearms are still a cause of great health concern, which can cause great aesthetic and functional damage to the patient, in addition to the loss of quality of life. The therapeutic choice for treatment will depend on the severity of the case and mastery of the technique chosen by the professional. The aim of this article is to report the treatment of a patient with bilateral fracture of the body and mandible branch, resulting from aggression by firearm projectile. Having as treatment established the extraoral access with installation of plates and screws 2.0 mm on the right and left side, because it is a good treatment option for comminuted fractures caused by firearm projectile, returning to the patient aesthetic, functional and psychological aspect.

“The mandible presents itself as the only mobile bone of the facial skeleton, being articulated with the head through two joints; it has horseshoe shape, in which there is a resistant central area, being weaker at its ends” (SIQUEIRA; CARVALHO et al., 2012). The mandible presents itself as one of the most commonly fractured bones due to its prominence (BAIRRAL; DUARTE et al., 2011), occupying the second place among all facial skeleton fractures (SAKR; FARAG and ZEITOUN, 2006).

The etiological agents of mandibular fractures may vary according to the region studied; the most common causes are: automobile accidents, physical aggression, sports accidents, firearms and pathological fractures (SCARIOT; OLIVEIRA et al., 2009).

According to Côrtes (2010) mandible fractures are among the most frequent lesions found in trauma treatment centers. In recent times, one of the main causes of mandible fracture has been physical aggression by firearm (CÔRTES; MARQUES and GUEDES, 2010), these lesions have been presenting as an important public health problem due to their morbidity and mortality rate (BERMEJO; COLÉTE et al., 2016).

The management of patients with gunshot wounds to the face remains quite controversial in relation to treatment (CLARK; BIRELY et al., 1996); the literature on the therapy for gunshot wounds to the face is scarce (MCLEAN; MOORE and YELLIN, 2005), some professionals advise performing surgical intervention in the initial stage (CLARK; BIRELY et al., 1996), however, some studies report a more conservative approach, without performing surgical procedures in the first moments (WEIDER; HUGHES et al., 1999).

Some important innovations have enabled a better treatment of mandibular fractures, such as the use of locking system plates, which can facilitate the management of fractures, whether simple or complicated, however, this does not totally eliminate complications (MORAIS; CARVALHO et al., 2010).

A 67-year-old male leucoderma patient was admitted to the Regional Hospital of Agreste, located in the city of Caruaru, victim of PAF-Familial Amyloidotic Polyneuropathy on the face, in which he was evaluated by the general surgery that opted, as initial conduct, the patient was tracheostomized in order to maintain a pervious airway. The next day, the patient was transferred to the Bucomaxillofacial Traumatology service of the Santa Ephigenia Hospital, in the same city. During the anamnesis, an extra oral orifice of the projectile was incoming in the right region of the face at the level of mandibular angle and exit hole at the level of extraoral left mandibular angle; the patient presented ecchymosis in the jugal region and continuity solution in the angle region and right and left body of the mandible. Imaging was performed (Computed Tomography), confirming the clinical findings of bilateral mandible fracture, with extensive comminution of bodies and mandibular angles, bilaterally caused a displacement between the fragments and with loss of basilar leveling, thus generating a defect in the continuity of the mandible. (Figure 1). 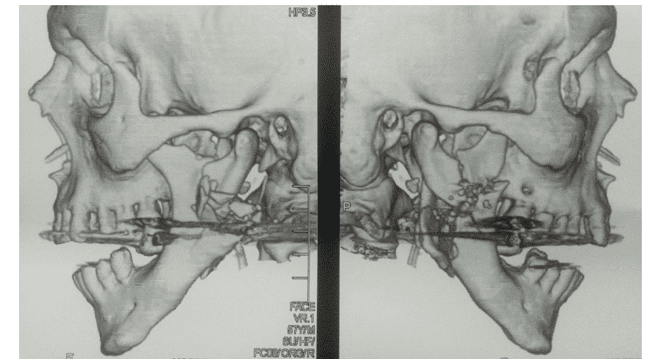 The surgery was performed after 14 days with nasal intubation and mandibular maxillary block, we opted for extraoral access, covering the submandibular region bilaterally with dilution of the planes, exposure of the areas of the fractured mandible; the reduction and surgical fixation of the mandible and fragments were performed with 2.0 mm straight titanium miniplates, the plates were modeled to fix the comminuted bone fragments, providing stability of the mandible and rescuing the mandibular framework. (Figure 2 and 3) 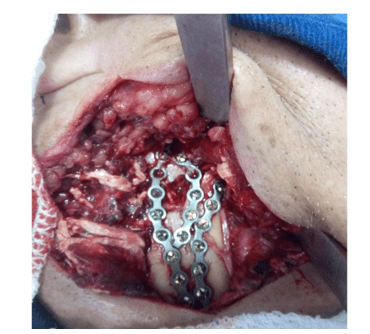 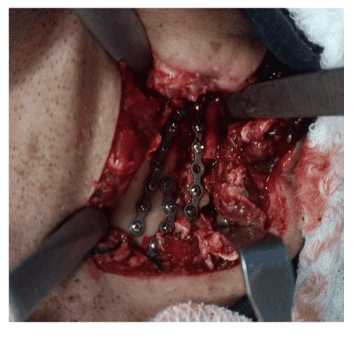 After the fourth postoperative day and hospitalization, the patient was discharged from the hospital because he was in a general, asymptomatic condition; there was no deficit of nerve structures, presenting preserved mandibular movements, only manifested a small difficulty to open the mouth, indicating a satisfactory occlusion. When performing the postoperative radiographic examination, the continuity of the bone segments was observed, without other alterations (Figure 3). Physiotherapy was requested to recover, as soon as possible, the range of motion, stimulating and contributing to the return of the affected sensitivity during surgery.

Figure 3 – Radiographic examinations (panoramic) denoting the reconstruction of the mandible with the internal fixation system. 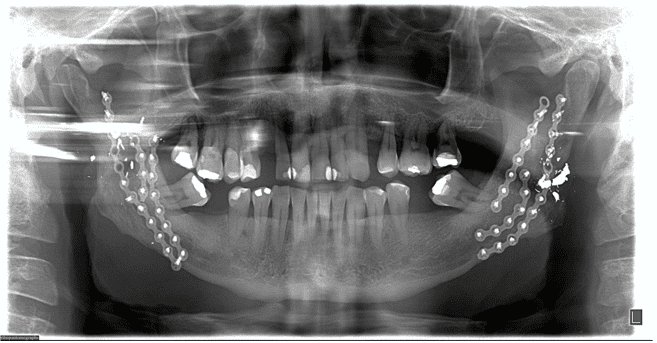 It is of great importance that professionals working in the care of PAF victims take into account the ATLS protocol. Often, apparently innocuous lesions can present unpleasant surprises for the professional, it is the responsibility of the surgeon to know that the presence of a skilled and well-trained team, may indicate or contraindicate definitive surgery at the first moment (RODRIGUES; ALMEIDA et al., 2020) (MORAIS; CARVALHO et al., 2010) (DANTAS; SILVA et al., 2018).

Most of the times the injuries caused by PAF are due to criminal activities (MORAIS; CARVALHO et al., 2010) (RODRIGUES; ALMEIDA et al., 2020), such extensive injuries may include bruising, profuse haemorrhage, contamination and increased intracranial pressure (GIESE; KOOPS et al., 2002) . When these projections reach the bones of the face, fractures of cominuído pattern in the mandible and transfixing wound in the maxilla predominate (MORAIS; CARVALHO et al., 2010).

The late or immediate approach to fractures presents many controversies in the literature, but it is up to the Bucomaxillofacial surgeon, together with an assistant team, to consider the potential of infection that such lesions are associated with, regarding the decision to maintain the projectile, it should be taken into account its location in the affected anatomical spaces (RODRIGUES; ALMEIDA et al., 2020). Each situation should be carefully evaluated and the decision of the ideal time for treatment should be chosen according to each situation, aiming at the complete restoration of the patient’s functions as soon as possible (KROON; VAN BEEK and VAN DAMME, 2007).

Another perspective related to the cases of gunshot wounds in the face, in most situations, is the maintenance or not of the projectile (RODRIGUES; ALMEIDA et al., 2020). It is essential that decision-making, by surgical or conservative approach, in relation to the objects housed can take into account clinical, surgical and anatomical criteria, in order to bring better quality of life and lower morbidity to the patient (SUASSUNA; SILVA JÚNIOR et al., 2017). These criteria should be considered with significant parsimony, because the location of the projectile is close to noble structures, such as veins, arteries and nerves, besides that the location to which the projectile is located can hinder or hinder its removal (RODRIGUES; ALMEIDA et al., 2020).

The surgeon needs to understand that not all gunshot wounds require surgical treatment. Injuries in which the projectile transfixed the structures without causing fracture or vascular injury do not require a surgical intervention, the protocol is cleaning the edges of the wound (DEMETRIADES; CHAHWAN et al., 1998). However, in PAF injuries with fractures in the mandible, the use of reconstruction plates predominates as treatment because it has advantages over other stabilization systems (ROCTON; CHAINE et al., 2007). The use of internal fixation systems eliminates or reduces the need for intermaxillary block, this fixation system presents as advantages the possibility of the patient talking, chewing, improving nutritional status. However, the lack of professional skill in the technique is a frequent event in the application of internal devices for fixation of mandibular comtinutive fractures, this lack of ability cause can cause damage to the roots of the teeth, fracture of the screw during insertion, absence of stable bone structures for fixation of osteosynthesis material and bone sequestration at the perforation site (RODRIGUES; ALMEIDA et al., 2020) (IMAZAWA; KOMURO et al., 2006).

Considering all the factors mentioned, the case described was conducted in the best possible way. The 2.0 mm plate system was used to reduce and adequately fix the multiple bone fragments, allowing the masticatory load to be supported, showing that the conduction of the case presented satisfactory results, reestablishing function and aesthetic contour, with minimal exposure of complications to the patient.

Face trauma involving firearms presents a challenge for the Bucomaxillofacial Surgeon, since the destructive level caused by such trauma is significant, always leading to questions regarding the best methodology for treatment, because it involves anatomical structures of great importance. The case mentioned showed that the use of rigid internal fixation through open reduction improved the patient’s well-being in the postoperative period, considering that this surgical technique allows a rapid return to normal physiological function, because it is more predictable optimizes the treatment result and reduces complications, allowing the reintegration of the patient to society in a short period of time , reducing the socioeconomic impact.

[2] Graduated from the Physiotherapy Course of UNISSAU College.