Xeroderma pigmentosum (XP) is a rare genetic disease, of autosomal and recessive character, and may affect both sexes, regardless of race, and often one case per 250,000 people. This disease has several other symptoms that present themselves heterogeneously over its carriers. The aim of this article was to quantitatively analyze the presence of the topic Xeroderma pigmentoso in scientific articles published between 2003 and 2018. In the identification, a total of 674 results were obtained. The follow-up of the following steps allowed, in the end, the selection of 24 papers. Regarding the language, most of the selected papers were written in Portuguese (around 58.33%), the rest in English (around 41.67%). The highest publication rates occurred between 2015 and 2017 (13%). The years 2007, 2007, 2011, 2014 and 2018 presented intermediate rates (9%) and the lowest rates (4%) occurred in 2003, 2008, 2010 and 2012, and 75% papers were published/presented in the 2nd decade of the 21st century, while the others (25%) were in the 1st decade of the 21st century. The findings of this study showed that there are few scientific studies on XP because it is a rare disease, which possibly leads to few investments in this area, especially with regard to treatment and medications.

Xeroderma pigmentosum (XP) is a rare genetic disease, of autosomal and recessive character, and may affect both sexes, regardless of race, and often one case per 250,000 people. Its most common clinical features are diffuse hyperpigmentation, erythema with flaking and early appearance of tumors – a thousand times more frequent in this group of individuals than in people who do not have such chromosomal abnormality. On a molecular scale, the causes of this pathology are attributed to high cell sensitivity to ultraviolet (UV) light and defects in DNA repair (Deoxyribonucleic Acid) due to reduced levels of repaired DNA synthesis, the latter contributing to skin neoplasms and eye abnormalities (VIANA et al., 2011).

This disease has several other symptoms that present themselves heterogeneously over its carriers. Among them, the following stand out: neurological complications (brain tumors, changes in electroencephalogram), redness of the eyes, developmental abnormalities and segmented early aging, epilepsy, sensorineural deafness, spasticity, hyporeflexia or arreflexia, paralysis (CHAIBUB, 2011).

XP also has a high polymorphic variation – from a genotypic point of view – with 8 types, with 7 groups of classical complementation (XPA, XPB, XPC, XPD, XPE, XPF, XPG) and 1 in the variant form (XPV). Patients in the XPA, XPB, XPD and XPG groups have their manifestations associated with neurological symptoms, the most severe form being DeSanctis-Cacchione syndrome that is linked to type A. XPV results in clinical characteristics similar to those in other ways, but has a lower severity and a better prognosis and, consequently, a higher quality and life expectancy (VIANA et al., 2011).

Through the complexity and rarity of XP, it is important to highlight from the literature the main genetic and clinical aspects of the disease, contributing to integrate several scientific findings into the same production and, consequently, to update the scientific community about (BRAZILIAN SOCIETY OF DEMARTOLOGY, 2020).

Quantitatively analyze the presence of the topic Xeroderma pigmentosum in scientific articles published between 2003 and 2018.

This is an exploratory, descriptive and retrospective research, with a quantitative and analytical approach of articles on the theme Xeroderma pigmentoso (XP).

The indicators used for the study were: the approach of XP, in relation to genetic mechanisms, incidence and forms of treatment of the disease, thus describing the existing information as a whole of the pathology in question.

In the identification, a total of 674 results were obtained. The follow-up of the following stages allowed, at the end, the selection of 24 papers, which varied between theses (master's and doctorate), laboratory studies, epidemiological studies and case reports (Figure 1). 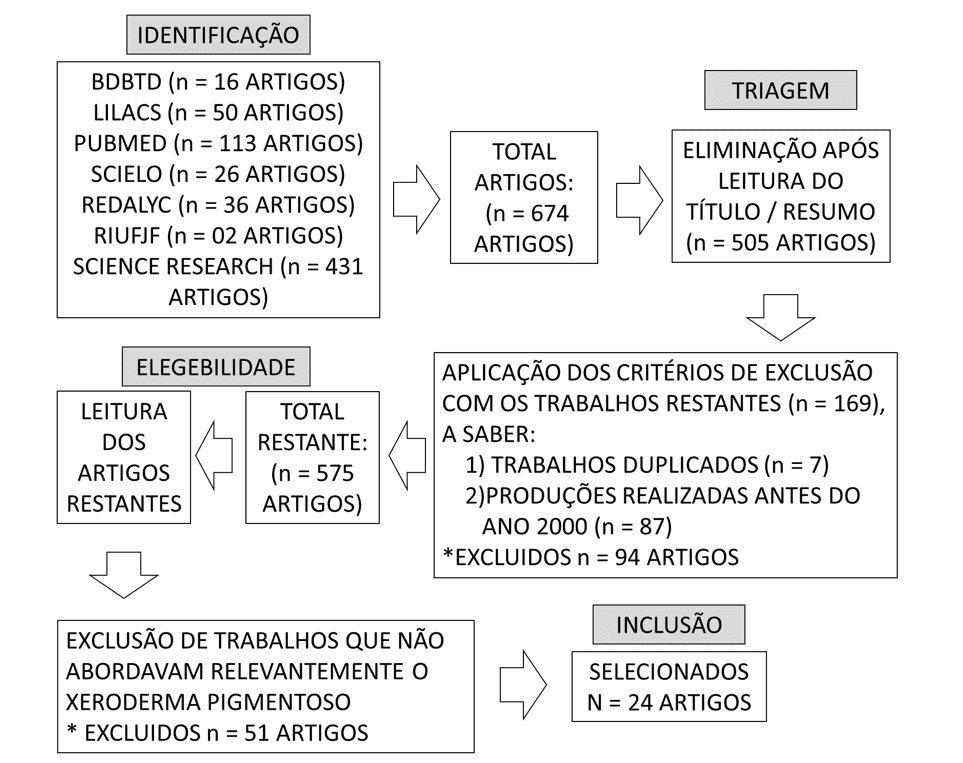 Regarding the language, most of the selected papers were written in Portuguese (around 58.33%), with the remainder in English (around 41.67%) (Figure 2)

Figure 2 Shows the percentage of articles published according to language. 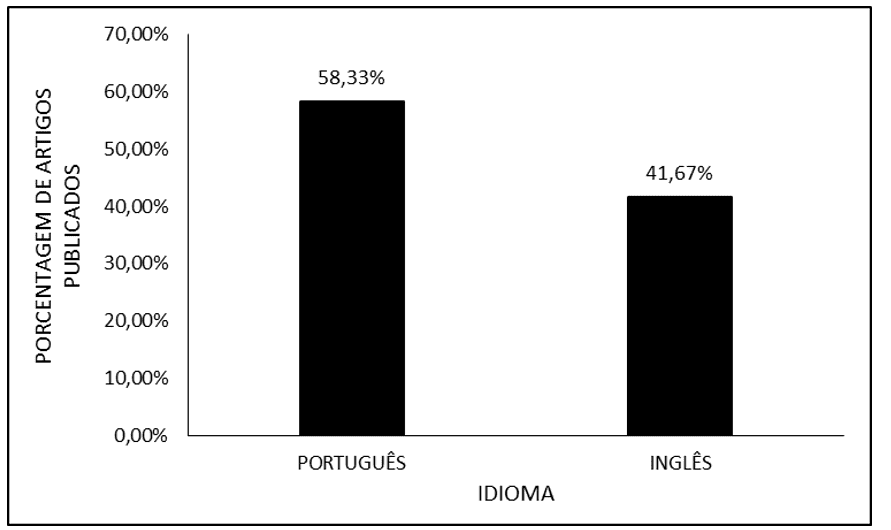 Figure 3 Shows the percentage of articles published in the 1920s. 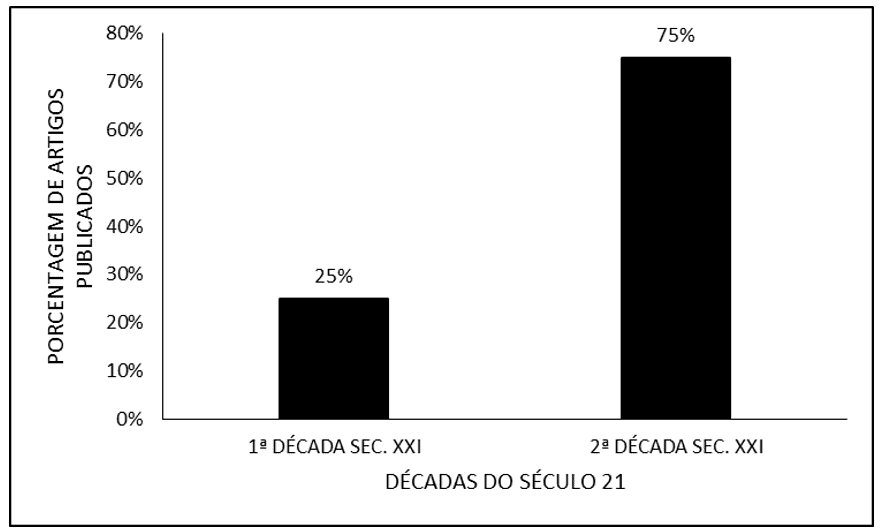 Figure 4 Shows the percentage of articles published by the year of publication. 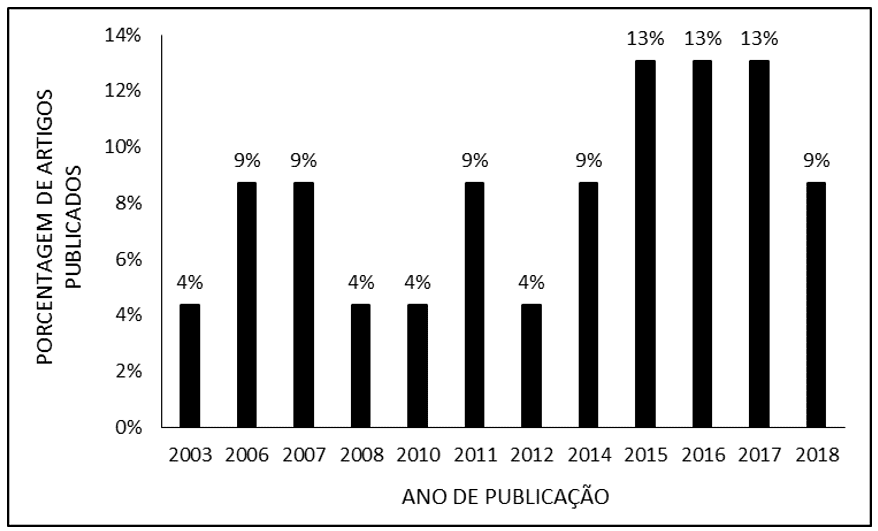 This small number of studies is probably due to the rarity of this disease that is independent of ethnic groups and whose main risk factor is consanguinity, because it is an autosomal recessive genetic disease. For example, the frequency of Xeroderma Pigmentoso in Europe and the USA is 1:1,000,000 and in Japan it reaches 1:22,000, having a prevalence in north African and Middle Eastern countries due to the high rate of inbreeding observed in these countries. Thus, the reduced number of carriers that are distributed globally makes it difficult to conduct a large-scale research with several participants for study (DANTAS, 2018).

The selected works are recent, all made in the 21st century and most made in the last 10 years. This is probably due to the study of the genetic aspect of the disease. In the 20th century, discussions about genes and heredity were still in the beginning. From 2001, with the first outlines of coding with the advent of genetic knowledge of the human genome, diseases that we could not attribute a cause before, have become better understood (NATIONAL HUMAN GENOME RESEARCH INSTITUTE, 2020). Xeroderma Pigmentoso being a non-contagious disease, but rather a hereditary pathology, which is manifested due to exposure to UV rays by a defect in DNA repair, depends on the theoretical genetic basis (BRAZILIAN SOCIETY OF DERMATOLOGY, 2020).

Another point to be analyzed the large number of works are in the Portuguese language, surpassing those in English. This fact should be listed with the large number of cases observed, for example, in Araras, a village in the interior of Goiás where, due to the high incidence of consanguinity, there was a variety of cases in relation to age, manifestation and extension. The work in Portuguese were more objective and complete, bringing tools for the management of the disease, such as the classification of types and the development of treatments, providing a basis for the help of this community (CHAIBUB, 2011).

The analysis of scientific productions made it possible to gather studies on Xeroderma Pigmentoso, which were in greater quantity in English and Portuguese. XP has a high sensitivity to UV rays, which can cause various skin neoplasms and there is an error in DNA repair. It can be concluded that XP has 8 types that can vary symptoms and sequelae depending on the type of XP.

Most of these productions cover the last two decades, which shows that research on this subject has taken a higher proportion in recent years.  The findings of this study showed that there are few scientific studies on XP because it is a rare disease, which possibly leads to few investments in this area, especially with regard to treatment and medications.

[6] Biologist, PhD in Theory and Behavior Research, Professor and researcher of the Degree Course in Chemistry of the Institute of Basic, Technical and Technological Education of Amapá (IFAP).

[8] Theologian, PhD in Psychoanalysis, researcher at the Center for Research and Advanced Studies (CEPA).

[9] Doctor, Master in Teaching and Health Sciences, Professor and researcher of the Medical Course of Macapá Campus, Federal University of Amapá (UNIFAP).

[11] Biomedical, PhD in Topical Diseases, Professor and researcher of the Medical Course of Macapá Campus, Federal University of Amapá (UNIFAP).