Peltophorum dubium has gained economical relevance to its uses in forest plantations and agroforestry systems, but seedling production, establishment, and management information are still restricted. Thus, this study aimed to understand the influence of the fruits on P. dubium germination. About ten thousand fruits were evenly distributed between three replicas of each treatment: Integral fruits, cut fruits, and direct seed sowing. The material was kept in a greenhouse with white plastic covering and periodic irrigation system. Seeds did not germinate at the integral fruit treatment. All the studied indexes presented significant discrepancies, except to uncertainty index. Germination rate was close to other studies results. When kept inside the fruits, seeds require greater time to germinate, and when fruits were cut they present an intermediate pattern between direct seed sowing and integral fruits sowing. High and fast emergence of this species is probably associated with its ecological whole as early secondary.

Peltophorum dubium (Spreng.) Taub. popularly know as Canafístula, is a Brazilian native species, which belongs to the Fabaceae family. It is widespread in southeast and south regions, but also present in west-center and northeast regions (SILVA; RANDO; CARVALHO, 2015). It is characterized as a helophyte, early secondary, anemochoric (fruits are dispersed by wind), high-tolerant to low temperatures, and a fast-growing species (CASTANHO, 2009; MATTEI; ROSENTHAL, 2002; MONTIEL; VERÓN, 2018).

This species is mainly used as a wood source to civil construction, paper,

furniture industry due to its resistance to high moisture and weather variations (MONTIEL; VERÓN, 2018). This species leaves aspect and tree-top form also provide its uses as ornamental (LORENZI, 2002; MATTEI; ROSENTHAL, 2002; VENTURIN et al., 1999). The fast-growing and widespread characteristics of this species led to its recent use of as an alternative to the wood industry in forest plantations (MONTIEL; VERÓN, 2018) and also agroforestry systems (SGARBOSSA et al., 2018).

The P. dubium fruits are indehiscent (i.e. in natural conditions the fruits do not open and spread seeds to the environment) samaroid legumes (MONTIEL; VERÓN, 2018). Thus, understanding the germination behavior when seeds are retained by the fruit could also provide insights about this species seed bank dynamic. Relevant information to understand the ecologic behavior of this species.

Ecological and economic information concerning about P. dubium seedling production, establishment and management are very restricted (GUERRA et al., 1982). Therefore, is essential to recognize the natural conditions that could promote or hampers germination. This species presents seed dormancy due to the structure of its tegument (PIROLI et al., 2005). This aspect has been extensively explored because dormancy is one of the most important defense mechanism against adverse environment conditions (PIROLI et al., 2005). Fruit processing is another important aspect to notice in seedling production perspective since it could reduce the production time because removing seeds from fruits is not necessary (REGNIER, 2019). Besides that, the influence of fruits in the germinating process of P. dubium has not been properly described. Being very difficult to recognize the germination behavior in a natural environment, when fruits are dispersed by wind.

Fruit processing methods and their effects on germination have already been described to other Fabaceae family members (REGNIER, 2019). Thus, this study sought to understand the influence of the fruits on Peltophorum dubium germination.

Plant material was collected in the plant nursery region at the end of April of 2018. Harvesting method consisted of mature fruits gathered directly from tree-top. The material was kept in open plastic bags at room temperature during 20 days, seeking to dry the seeds (PIÑA-RODRIGUES et al., 2007) and to recognize the emergence of insects or pathogens.

Fruit lot consisted of 10 863 units, and they were evenly distributed between three repetitions of each treatment. The control treatment consisted of direct sowing of integral fruits (Figure 1a). While in the second treatment all fruits had their edges around the seed removed with scissors (Figure 1b). In the third treatment, seeds were removed from the fruits (Figure 1c) and proceeded to sow. As this study did not seek to understand the influence of dormancy on germination, and P. dubium seeds are easier attacked by pathogens after the scarification (MATTEI; ROSENTHAL, 2002), they were not submitted to any processing. In sequence, fruits and seeds were planted in white trays containing vermiculite as substrate. After all treatments, the plastic trays containing the fruits and seeds were kept at greenhouse with white plastic covering and a fogging watering system with periodic activation every 35 minutes. Plant emergence was recorded about 70 days after seeding, with measurements nearly every 7 days.

The evaluation consisted in the use of indexes as mean germination time, also known as mean length of incubation time (RANAL; SANTANA, 2006), and the standard deviation was calculated as proposed by Haberlandt in 1875 (LABORIAU, 1983). All the other indexes were calculated as presented in Ranal e Santana (2006).

All data were compiled to Excel component of Microsoft Corporation Office pack. Most usual germination indexes were obtained and graphically represented through GerminaQuant software (LOZANO‐ISLA; BENITES‐ALFARO; POMPELLI, 2019), and also all the statistical tests using the individual data of the replicas. The results were tested by ANOVA and in sequence submitted to Tukey test with a critical p-value of 1% (p < 0.01).

Some indexes require at least one germination to its value estimation. During the analysis period, there was no seedling emergence to the control group (Integral fruit sowing), which made the estimation of mean germination rate (MGR), mean germination time (MGT), germination speed (GSP) and synchrony (SYN) indexes not possible. Only the uncertainty index did not present statistical differences between the treatments (Figure 2). While the integral fruits sowing treatment no seeds germinated, cutting the edges of the fruits provided an intermediate response of germination. When the fruits had their edges cut, the germination rate, speed, and synchronization are lower, and time required to germination is higher than the observed values to direct sowed seeds. 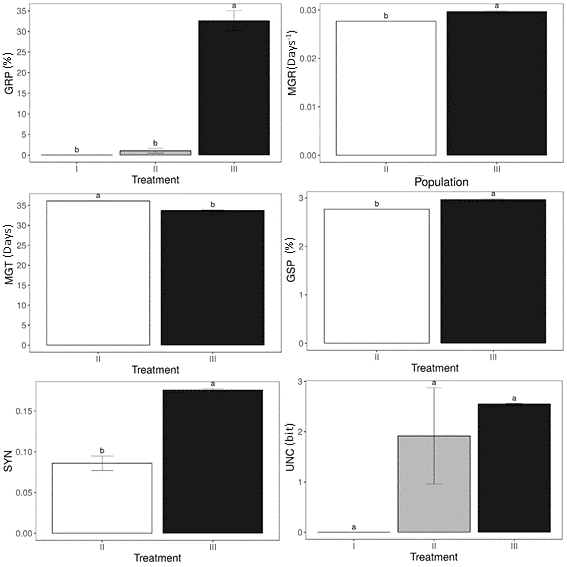 In general, Peltophorum dubium documented germination rate, of non-processed seeds, is about 40% (CASTANHO, 2009; PIÑA-RODRIGUES et al., 2007). In this study, the mean germination proportion, also denominated as germination rate, reached 32.5%. Relatively close to the mentioned studies results. However, this species germination rate presents great variations. Other studies indicate that the seed quality could modify the germination rate, but in general, there is a range between 15 and 78% of germination to this species when seeds are directly sown (GUERRA et al., 1982; MARQUES, 2018). P. dubium is an alogamic species, presenting high genetic variability in one single population due to the low rate of self-fertilization (PIÑA-RODRIGUES et al., 2007). Being possible to have a relatively representative estimation of germination aspects even when a low number of individuals or populations are sampled. At the same time, this reproduction system promotes great variations between experiments results.

Mean germination time and germination speed indicate that, when kept inside the fruits, seeds require greater time to germinate (Figure 2). These indexes also point out that fruits seem to hamper seed germination. Besides that, the gradual removal of the fruit propitiates greater germination occurrence. Similar results were documented to Dalbergia nigra, also a member of the Fabaceae family which possess samaroid fruits (REGNIER, 2019). Corroborating that when seeds are more exposed, the germination process is resumed earlier, requiring less time to the healthy seeds to germinate.

Uncertainty index is derived from the diversity index of Shanon (RANAL; SANTANA, 2006), which was later introduced to germination. Thus, lower values should present greater concomitance of germinations. At this study, the obtained values to this index were not significantly different (Figure 2). The main problem associated with this index is that when the number of seed emergences is low, the index is consequently lower. A documented effect observed to rare species when this index was used in ecology context. In this study, integral fruits and cut fruits were especially affected by the limitations of this index, providing no substantial differences between treatments. Therefore synchronization index (SYN) based on Primack studies (LOZANO‐ISLA; BENITES‐ALFARO; POMPELLI, 2019) was introduced as a complementary index. This index indicates the variations between the treatments are significant.

During the experiment is possible to notice that when fruits were cut they present a slight germination response, situated between direct seed sowing and integral fruits pattern (Figure 3). Germinations of the cut fruits treatment also presented a delay when compared to direct seed sowing treatment. 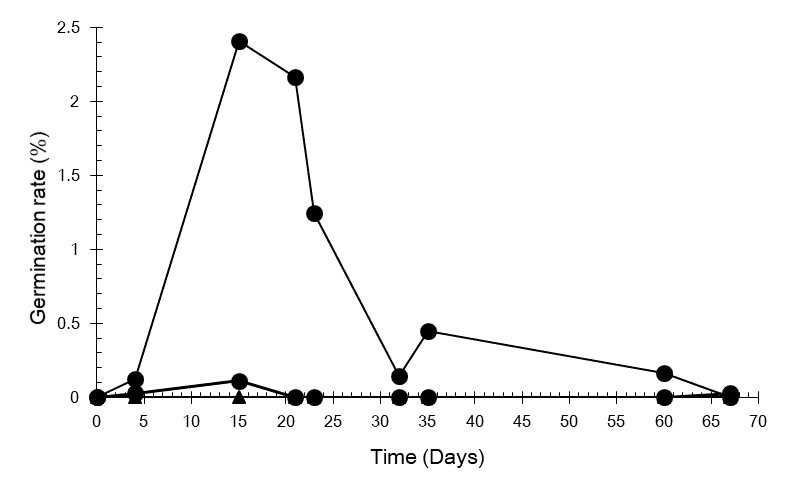 It is already recognized that this species presents low and uneven germination when they are not scarified (GUERRA et al., 1982). The non-cumulative pattern of the direct seed sowing emphasizes this hypothesis. The analysis period of 70 days could not be long enough to properly understand seed germination of seeds kept inside the fruits. In natural environment seed dormancy is an important mechanism to keep germination unsynchronised, providing constant support of new individuals (recruits) to the population (FERRAZ-GRANDE; TAKAKI, 2001) and also propitiates that seedling emergence occurs only when the environmental conditions are favorable (OLIVEIRA et al., 2012). When fruits had their edges cut, seedling emergence was sporadic, what could also contribute to the maintenance of the seed bank, since the mentioned properties provided by the dormancy seems to be intensified with the fruit protection.

Direct seed sowing treatment provided germination stabilization about 60 days after the sowing (Figure 4). Fruits with their edges removed presented a sporadic pattern of germination, and seedling emergence still kept happening when the experiment was finished. This highlight that, to this procedure, the period of analysis was not adequate. 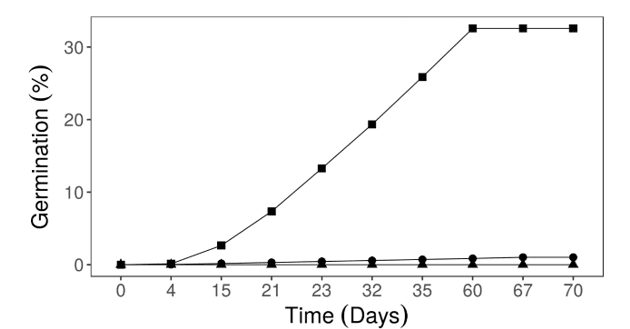 However, the obtained germination pattern is consistent with the documented data that this species germination seems to reach the highest emergence during the first 30 days (MATTEI; ROSENTHAL, 2002). Other authors also emphasize that P. dubium seeds present fast emergence (MARQUES, 2018). Possibly this feature is related to its species high efficiency in early occupation of disturbed areas (CASTANHO, 2009). Where the permanence of the seed in the environment, especially in litterfall, they are exposed to predation, moisture and temperature changes (PIÑA-RODRIGUES et al., 2007).

The first stage of germination is imbibition, when seed absorbs water, a process that restarts the development of the embryo (POPIGINIS, 1985). In general, Fabaceae family members present difficulties to absorb water until seed tegument is modified (GUERRA et al., 1982). Thus mechanical barriers seem to prevent the proper contact of seed and water, and consequently, germination. The perspective this study provides is that not only seed tegument could affect the germination of seeds in natural conditions, but possibly fruits also do it so. Seeds could require a greater time to germinate because they must be free of its fruit to easily germinate. Providing new perspectives on the impact of samara fruits, in Fabaceae family, could have on germination.

P. dubium germination seems to be affected when seeds are kept inside the fruits. Seeds directly sown presented greater synchrony and a better, higher and faster germination when compared to the other treatments. Indicating that fruits also hampers the germination of this species. Intensifying the dormancy effects.

I would like to appreciate Secretaria do Verde e Meio Ambiente, of São Paulo due to its trainee programs. In addition, the workgroup of Harry Blossfeld Municipal plant nursery, especially my trainee co-workers, and my bosses. Victor Leite Jardim to provide informative illustrations to this publication.

REGNIER, L. Influence of Harvest, Processing, and Substrate in the Germination of Dalbergia nigra Seeds. Journal of Horticulture and Plant Research, v. 5, p. 30–37, 2019. 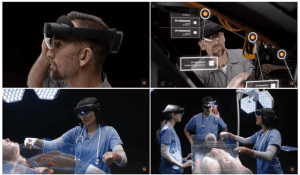