Morinda citrifolia L. is a medicinal plant belonging to the family Rubiaceae and is popularly known as Noni. The fruit juice is rich in immunodulatory polysaccharides against sarcoma-type tumors called Noni-ppt and because of its medicinal properties; this species has been collected indiscriminately from its natural environment. Thus, the objective of establishing a culture medium for slow growith storage for the conservation of noni in germplasm bank in vitro is an excellent way to conserve this plant, which is unheard of for this species. For this, explants type nodal segment were inoculated, respectively in complete B5 culture medium, as well as diluted in the half and in the fourth part, in addition to several types and concentrations of osmotic growth regulators. After 180 days kept in environment for slow growth storage, it was verified that the most suitable medium for the maintenance of this species through this technique was the B5/2 added 2% sucrose, 1.0 mg/L BAP and 3,0 mg/L IBA. The highest survival rate, number of shoot per buds (1.47a), number of buds per stem (2.27a) and, consequently, the highest multiplication rate (4.07a), of the total absence of callus and height of the shoot adequate to the semestral repetitions, when compared with the other treatments used in this experiment. However, we conclude that it is possible to maintain explants type nodal segments in slow growth storage culture medium, aiming the conservation of this species in germplasm banks in vitro.

According to Vasconcelos et al. (2014), Morinda citrifolia L. is a medicinal plant belonging to the family Rubiaceae, popularly known as Noni, which is exposed to genetic erosion caused by indiscriminate collection and frequent deforestation caused by man for urbanization in Amazonian areas of natural occurrence. According to Oliveira et al. (2011), fruit juice is rich in immunodulatory polysaccharides against sarcoma-type tumors called Noni-ppt and Silva et al. (2014). They demonstrated the antibacterial, antiviral, antifungal, antitumor, anthelmintic, analgesic, hypotensive, an anti-inflammatory and stimulant of the immune system of this fruit, which is popularly used in the treatment of cancer, and can become an important tool in the prevention of this disease.

Regarding the conservation actions of medicinal plants, the adoption of biotechnological techniques is of the utmost importance, since they are capable of multiplying and conserving plants in laboratories, so that it is not necessary to use large areas of soil for conserving the genetic variability of a plant species (NASCIMENTO et al., 2012). The most commonly used permanent preservation method in biotechnology is the slow growth storage technique, which establishes a germplasm bank in plant tissue culture laboratories, where the propagules are cultivated in vitro in sterile culture medium for long periods of time , in rooms with physical characteristics of luminosity, humidity and adequate temperature, which according to Bustamante and Ferreira (2011), aim at the conservation of the germplasm, which besides preserving the species, allows access to the genetic material for characterization, domestication, development of new varieties and prospecting of genes, reverting in benefits to all society.

Thus, in vitro growth during the shelf life may be limited by various physical and chemical factors, such as reduction of temperature and/or light intensity, dilution of the nutrients in the culture medium and by the use of chemical agents and osmotic, capable of inhibiting the growth of the material in culture (OLIVEIRA et al., 2000).

In vitro conservation, accessions are generally maintained at temperatures between 18 ± 2 ° C, in order to reduce growth and number of subcultures per year (SILVA et al., 2012). For the reduction of plant metabolism, changes in physical or chemical conditions such as the culture medium including organic and inorganic nutrients, osmotic regulators or growth inhibitors (VETTORAZZI et al., 2017) have been used as a strategy.

Before the start of routine procedures for the conservation of germplasm in the medium term, several issues need to be analyzed. Accessions should be evaluated for genetic variability, since the in vitro conservation procedure is costly, making it impractical to keep samples that are genetically similar or very close. In addition, a minimum knowledge of the biology, physiology and environment of origin is of great importance, species, which, in general, can help in the determination of adequate in vitro conservation conditions in the medium term (GUIMARÃES et al, 2011), thus avoiding the loss of genetic diversity.

In the short and medium term storage, the stored material is subcultured at regular intervals of at least six months. Frequently, periods between subcultures should be as long as possible to decrease explant manipulation and reduce the risk of contamination. It is necessary to mention that this technique is susceptible of technical errors and changes in the genotype due to the genetic instability presented by eventual accesses. The goal of germplasm storage through the slow growth storage technique is to define experimental conditions to favor minimal growth without altering genetic stability (ALVES, 2010).

However, the risk of such mutations can not be totally ruled out and the limiting growth conditions can introduce a new danger: the inevitable physiological stress. It is important that the procedures applied to minimize growth are also able to maintain maximum crop viability (SILVA and SCHERWINSKI PEREIRA, 2011).

Noni has great potential as a phytotherapic and therefore has been collected indiscriminately for the production of phytopharmaceuticals which has led to its genetic erosion, which can lead this species to extinction, not elaborate a protocol for conservation in slow growth stored in tissue culture laboratories. Considering the seriousness of this problem, at a time when humanity is concerned to conserve the biodiversity of planet, the proposal to establish a protocol for the conservation of this species in an in vitro germplasm bank using biotechnological methods such as slow growth is a concrete attitude of preservation for the rational use of this medicinal species that begins to be cultivated commercially in the interior of the State of Amazonas – Brazil.

For the establishment of culture medium for the conservation of Morinda citrifolia L. in a germplasm bank in vitro, nodal segments explants kept in a growth room with 4.0 cm height were used in this experiment, as described by Silva & Scherwinski-Pereira, (2011). The vials used were test tubes and the culture media described below were supplemented with the concentrations and types of auxin and cytokinin found by Silva et al. (2014), and with various concentrations and types of osmotic growth regulating agents, aiming the slow growth in vitro for the conservation of this species:

The test tubes were maintained for 180 days in a growth room with a temperature of 18 ± 2ºC, 60 ± 5% relative humidity and 16h of photoperiod with light intensity of 2.0×107μE.cm-2.s-2 from two lamps fluorescent white fluorescence (GE of 85 Watts), when then the percentage of survivors, number of shoot per buds, number of buds per stem, multiplication rate given by the number of shoot per buds x number of buds per stem , height of shoots and presence of calluses and roots.

The experimental design of this experiment was completely randomized and the Tukey test at the 5% level in the R program was used for the comparison of the means of the treatments. For this work, 30 explants per treatment were used.

According to Table 1, the treatment constituted by the B5/2 + 2% sucrose + 1.0 mg/L BAP culture medium induced the highest percentage of survival (100%), the highest number of shoots per buds (1.47a), the highest number of buds per stem (2.37a) and, consequently, the highest multiplication rate (4.07a), besides not inducing callus and producing seedlings with the height adequate to the needs of the repicency periodicity of the germplasm bank technique. This result was positive for conservation, since this technique provided that all explants survived, multiplied and did not induce somaclonal variation. In addition, at the end of this process, all plants were acclimatized with great ease (data not shown) and presented multiplication rates similar to those of Silva et al, when returned in culture medium for this purpose.

In this work, we found that the B5/2 + 2% sucrose + 1.0 mg/L BAP culture medium was able to maintain green and vigorous noni explants after 180 days of submission to the germplasm bank conditions.

The culture medium established here induced the best characteristics observed during the development of this experiment, in addition to not producing callus, which is an important characteristic when it is desired to maintain explants in a germplasm bank in vitro, precisely because these accessions have some economic and/or interesting agronomic activity, such as the presence of a disease resistant gene and/or a number of more sweet, larger or fleshy fruits, water stress or saline resistance, among many other examples and the induction of callus may lead to the somaclonal variation that, in theory, can lead to the loss of these genes of interest (CALVETE et al, 2009; ULISSES et al, 2000). Although the treatment indicated here has not produced roots, this fact is very common in the presence of osmotic agents retarding growth, being necessary the subsequent addition of polyamines such as, for example, putrescine or spermidine aiming the rooting of the plant (SOUZA et al., 2011). Still in Table 1, it can be verified that the aforementioned treatment induced higher shoot height, which is not interesting for segmental nodal explants kept in a germplasm bank environment, since the goal is to transfer them to fresh medium at least every six months, and seedlings that grow very need to be transplanted before the end of this period. However, the noni seedlings in the treatment indicated here grew only 1.15 cm, which is an excellent slow growth rate, since the test tubes are on average 15.5 cm high and would take a little more 13 months to reach the top of the turbo and require re-recording.

Thus, with this work, we conclude that it is possible to maintain plantlets in a germplasm bank environment, in slow growth, using the culture medium indicated here.

It is concluded that, with this experiment, it is possible to preserve nodal segments of Noni through the technique of slow growth storage, which makes it possible to safeguard this species in a germplasm bank in vitro, representing another agricultural alternative capable of reducing environmental impact by restricting deforestation and promoting sustainable development.

We thank FAPEAM for the scientific initiation scholarship. 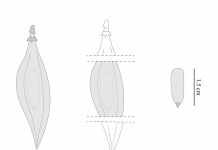 Inhibition of elastase by aqueous and ethanolic leaf extract of Sedum Dendroideum: An in vitro study

Quantitative panorama of a decade of cases of food intoxication in...