The school has the important role in the development of the child as an agent for the promotion of eating habits and healthy lifestyles, as it is the place where children spend most of their time. In general the children gain weight with ease due to several factors. This work aimed to alert not only the school community, but also the parents of the students so that they are aware of healthy eating combined with regular physical activity to have a better quality of life. A literature search was carried out with the contribution of some authors such as son, Antônio DE KLERK-2000, among others, emphasizing as well the importance of a balanced diet and combination with physical activities regularly. In this study it was found that obesity was not only within the school and in a set that connects family and community, in the face of this perspective was held an awareness with learners through lectures and practices with brochures and videos. Between various accented and problems encountered in school meals as, in the speed with which these foods are consumed, due to the short time of leisure activities, the lack of incentive for the consumption of fresh, natural foods which in this case should be proposed by their own parents, to meet the nutritional needs of their children. The school has also had a nutritionist to help solve this problem of school meals by ensuring quality food, but even the kids were consuming snacks sold in the cafeteria that were not natural lanhes and that was outside the nutritional standards, this was solved the canteen stopped selling these snacks, the first step was given and that the eating habits of students went on to become better each day.

Food and proper nutrition are essential requirements for the growth and development of the child, more than that, are fundamental human rights, would represent the basis of life itself. The fastest growing nutritional problem in the world is obesity, due to the next dimension by acquiring in recent decades has been approved as an epidemic throughout the world; Since the modern eating habits represented by fast food and little physical activity has contributed directly to the increase of the population overweight.

Second Domingues (2002), obesity can be of exogenous origin, covering 95% 98% of cases, or endogenous. Exogenous obesity stems from the imbalance between caloric intake and expenditure. The school has the important role in the development of the child as an agent for the promotion of eating habits and healthy lifestyles, as it is the place where children spend most of their time. In general the children gain weight with ease due to several factors. The overweight 34.8% of boys and reaches 32% of girls in this age group. Obesity was already established between 16.6% 11.8% boys and girls in between Brazil.

Childhood obesity is characterized by excess fat accumulated in the fatty tissues. Is directly linked to childhood as it is during this phase that the greatest part of the fat cells. Thus, people who exhibit excess weight in childhood tend to be more obese in later life compared to those who became obese later by making childhood obesity a via for obesity in adulthood.

In this context, the goal was to make a prevention of obesity at school, promoting nutrition education in students and playful form physical activities at school, a survey in 25 groups 04 students totaling 100 children, to check the process of overweight or obesity, analyzed food consumption in relation to nutritional requirements, was reported to the same and to the parents ' health risks due to inadequate feedings and stimulating them to healthy eating practices , what kind of snack students carried to school.

This study was conducted with 04 25 students groups. Between several and accented power problems encountered in school as:

The children ate snacks sold in the cafeteria, this control has been in school and the students began to have healthier eating habits. The weighing, the measurement of time, the use of the formula for verification of the basal metabolism, I.M.C., the diagnosis through a questionnaire to the learner and parents, exposure through presentation of the results obtained. The use of multimedia projector and the creation of an informative brochure (Annex 01).

In the studied population was verified in the total 20% of parents accompanied their children's food, and the menu was mostly without breakfast because your son ever woke up on top of the well to go to school, at lunch was rice, beans and meat, hardly had salad and vegetables. The lunch that his son took to school mostly was the package of cookie or chips of Cheeps type or package of potato chips, daily parents offered sweets and chocolates. Day by day the parents said their children are on the phone daily, mostly leisure was the tv, the computer and the phone, not practiced any physical activity, and only 10% of parents would set timetables for their children watch tv or be on the computer, but mostly responded that they had no how to monitor their children. Regarding the answers to the questionnaire 55% answered that their parents accompanied their meals and 45% answered that their parents were going to work and they were at lunch at school. In the range 40% at school was just with the snack was offered in a snack, but 60% beyond the snack still bought sweets, snacks and ice cream in the school canteen. As for your daily diet 30% said make more of 03 (three) meals per day and 70% said they did less of 03 (three) meals, but they ate snacks sweets and ice-creams on a daily basis. What was asked what they most liked 90% said they liked Hamburgers, pizza, chocolate and salted, and 10% of soft drinks and juices.

Food pyramid is an instrument, under the graphic form, which aimed to steer the school community for a healthier diet. Is a food guide that demonstrates how should be the daily diet for a healthy population, above 2 years of age. Each part of the pyramid represents a group of food and the number of servings recommended daily. It has been shown that in the daily diet should include all groups recommended to ensure the nutrients that our body needs, as well as in the pyramid physical activity where we show each step of physical activity.

At the bottom of the pyramid, we find foods rich in carbohydrates such as pasta, breads, cereals and rice. For being the largest group, should be consumed in larger quantities during the day. Then, we find the Group of fruits, vegetables and vegetables provide vitamins, minerals and fiber for our body. At the third level of the pyramid, are the food sources of protein and minerals such as meats, vegetables, dairy products. At the top of the pyramid are the foods that should be consumed in moderation, as well as calories, can lead to obesity, cardiovascular disease, diabetes and other diseases. In this group are the sweets, sugars, fats and oils.

At the top of the pyramid are more sedentary activities, which require little physical effort, such as spending hours in front of the computer, TV, sleeping, etc.

Below are the flexibility and strength exercises that serve to keep our body in a State of optimal maintenance, receiving often that small dose of stretching to keep us relaxed, without tensions accumulated, with organized posture and strength to keep us firmly to our daily activities and sports as well, with the firm stance and stabilized to prevent formation of musculoskeletal injuries or antálgicas postures.

Below are the aerobic exercise and recreation activities, which serve to keep our body in activity, far from sedentary. This phase of the pyramid represents that in the past we spent most of our time doing out there in the wild: hunting, surviving, marking our territory.

At the bottom of the pyramid we find daily activities, that may seem simple, but demand biomechanically correct movement, organized and require our constant drive, lower body to pick up a box, extend an outfit in a high railing, walk the dog on the street, moving the penalty on the stove until the movements of modern life such as driving the car count. This movement is paramount to our survival, but if any of the activities above the base are missing, the base will suffer consequences in its composition, will not be strong and sturdy enough to perform all tasks.

Most time spent in front of the tv, computer and cell phone are sedentary ducts that have been linked to weight gain and obesity in childhood. Since then, few mechanisms have been proposed in an attempt to explain this relationship:

As Gh and Gh (1998), within the physical exercise routines, the most appropriate procedure to cause positive impact on weight control corpora consists in participation in physical activity involving the use of large muscle groups and can activate all the organic system of oxygenation. Exercises that lend themselves to this purpose are called aerobic and, very particularly, include medium to long-term efforts, dynamic character, steadily and of moderate intensity.

After the intervention of work performed in a meeting with the school community of about 95% of parents said they would follow their children in healthy activities feed daily and they would monitor their children on a daily basis. After the intervention of the project were interviewed students as their parents would be acting in a matter of food and activities, 95% responded that at least one of their parents were following its activities and daily food, some came to say that his father took the phone and I would only give it back when I get better at school and at home. We see that obesity is increasing significantly for three decades, before several behavioral factors of human beings, including the technology that advances rampantly is often not accompanied by the low-income population, but through population growth, developing nations and the developed comes a capitalist system of deploying sustainable development where the population has been receiving all this technology without at least being prepared for such , and the misuse of the same come in unprepared a leading life imprisonment and physical inactivity, which concluded with this work, which is at school we have to warn the public against this disease that is becoming a worldwide epidemic "obesity", and that through actions together we can combat it easily for people to come to a better quality of life. 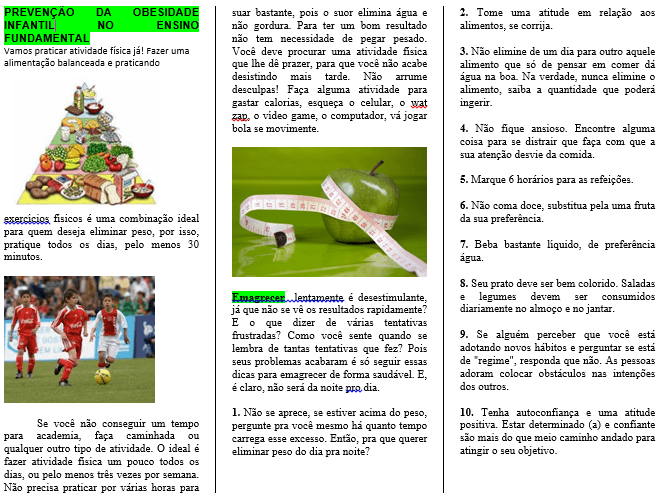 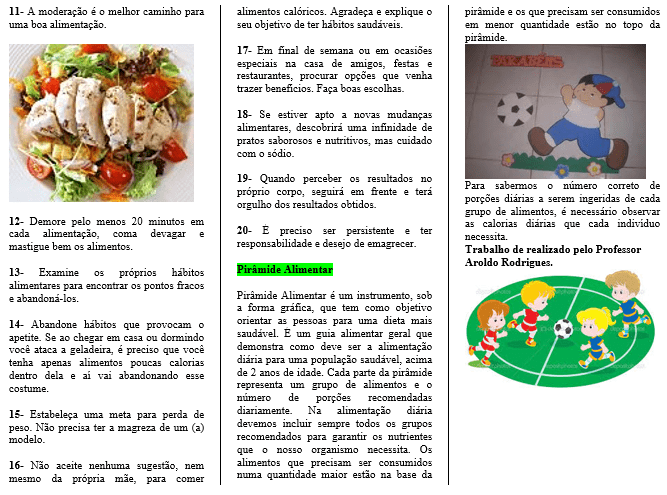 Food consumption of practitioners of weight training in the pre and...